For your consideration, we here publish ballistic charts which can be viewed in greater detail by clicking on the chart. Then click the White X in the upper right corner to return to the text.

NOTE: It is most important to understand that the powder charges listed on the following charts are safe only in Faeton rifles and are not intended for use in ordinary muzzleloading arms.

We specifically disclaim any liability of any kind for any damages, injury of any kind, or death by anyone who may use this data in any rifle other than a genuine Faeton as made by R.J. Renner. 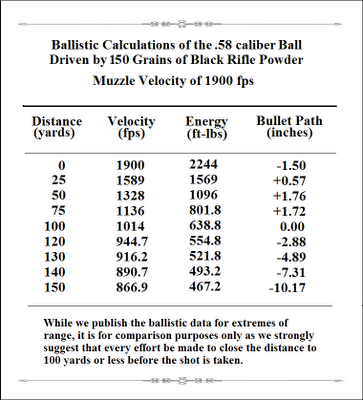 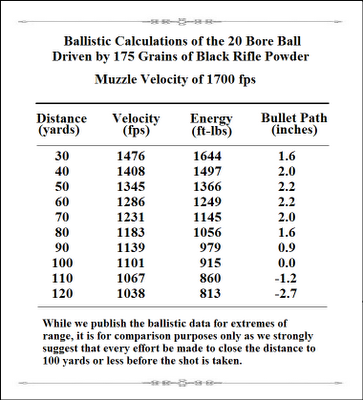 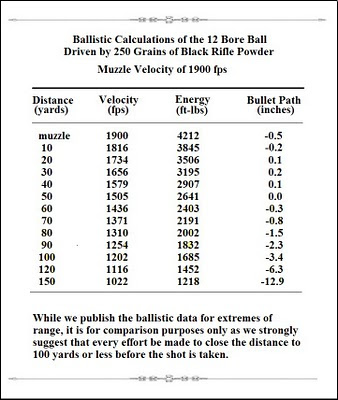 While we offer the above ballistics tables based upon simple Newtonian physics, to really comprehend the meaning of the data, we believe that one must also consider the element of Momentum, which is not generally contemplated in determining the efficacy of large calibre round-ball rifles.

The amazing ability of Faeton rifles to put down large and tough game with a single shot seems incredulous to those not familiar with large calibre round-ball rifles. It has been with the hope of offering better understanding of this fact to our customers that here provide the following table of data pertaining to the Taylor Knockout Value for the .62 Faeton. It will provide factual numbers regarding the .62 calibre Faeton’s 320-grain round ball departing the muzzle at 1700 feet-per-second and it’s downrange values as well.

When considering the effectiveness of round ball projectiles it has been common practice to compare them based upon simple Newtonian formulas that compare velocity and energy data only. And when compared to modern jacketed bullets launched from high-powered rifles the lowly round ball seems sorely ineffectual.

While it's true that downrange velocity and foot-pound numbers don’t seem very impressive when it comes to big round balls, there is an element of the power equation that is lacking from simple ballistics charts – one that has been consistently overlooked by the crowd. A concept that, once understood, will forever change the way you think about big, round-ball projectiles.

That missing element is momentum.

If we are to consider and believe in paper ballistics alone and ignore actual performance in the field, we would be lead to believe that the .243 Winchester outperforms the old soldier, .45-70 Government, in its ability to put down big game.

However, the facts of the matter are quite the opposite as we all know. But we tend, nevertheless, to continue to use simple two-element paper ballistics equations as we seemingly lack for a basis of comparison of performance between various loads, be they cartridge or loose powder and ball. Regardless of which, the point is that we continue to draw the wrong conclusions about their effectiveness on game when comparing by mere velocity and energy numbers alone.

This puzzling situation is nothing unique to us moderns and has, in fact, been carefully contemplated many long decades ago by the famous African hunter, John Taylor. Taylor early realized that paper ballistics derived from simple Newtonian calculations did not account for the ability of big-bore bullets lumbering along at moderate velocities to put down really tough game with a single shot when compared to smaller-bored, higher-velocity bullets.

He postulated that the missing element of the power equation was bullet diameter. Including the bullet diameter in the equation provides a three dimensional view of the power dynamic while providing insight to the big round ball's seemingly magical ability to take down big game like it had been struck by the hammer of Thor.

In order to more fairly compare bullets and their effectiveness on game (disregarding other variables, such as bullet design i.e. jackets, ogive, metal temper, etc.), Taylor devised an equation that included the all-important bullet diameter which changes the performance values tremendously and provides a much more accurate basis of comparison by including the frontal area, that is, the striking area of the projectile. This is the actual surface area by which that all-important momentum is transferred into the target. Appropriately, it is termed the "Taylor Knock Out" formula.

When we apply the TKO to our humble, unsophisticated round-ball traveling at higher (than average) velocity, we soon realize that we are not as handicapped as previously thought. The application of Taylor’s formula to ballistic data results in a simple numerical value that allows easy comparison that any non-rocket scientist can understand and appreciate.

The formula is very simple to calculate where the muzzle Velocity (expressed in feet-per-second) is multiplied by the Diameter of the bullet (in thousandths of an inch) times the Weight of the bullet (in grains) and the product thereof is divided by 7000 (the number of grains in 1 pound). The resulting number expresses a Knock Out value which then becomes the new basis of comparison.The higher the Taylor value, the greater the knockdown power.

Yes, but you argue, those values are based on muzzle velocity and the downrange numbers will be much lower as that 405-grain flat-nosed slug runs out of steam - and even more so for a big round ball - right? While true to an extent, the loss is not as bad as you might think. One can easily calculate the downrange Taylor value of any projectile simply by running the equation and plugging in the velocity at a specific distance from the muzzle.

In this example, the limitation on the .45-70 is not a lack of knockdown power, it’s the low velocity and the resulting rainbow trajectory of the bullet which is so bowed that accurate placement within the vital zone on game becomes rather iffy beyond 80 yards that is the limiting factor. Unless, of course, you have years of field experience in accurate range estimation - or a range finder.

We achieve very flat trajectories from the Faeton with higher velocity loads which can safely be loaded in the Faeton due in part to its Genuine Forsyth Rifling™.

The amazing ability of Faeton rifles to put down large and tough game with a single shot seems incredulous to those not familiar with big bore round ball rifles. It has been with the hope of offering better understanding of this fact to our customers that spurred our ballistic research and the development of the following table of data. It will provide some interesting numbers regarding the .62 caliber Faeton’s 320-grain round ball departing the muzzle at 1700 feet-per-second and it’s downrange values as well.


Clicking on the chart will enlarge it for easier viewing. Then click the White X at the top right of your screen to return to the text. 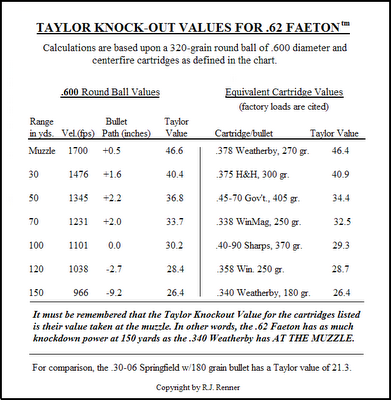 Remember that the Taylor value cited for the centerfire cartridges listed is their knockdown power AT THE MUZZLE. In other words, the Faeton’s knockdown power at 150 yards is about equal to the knockdown power generated by the .340 Weatherby at its muzzle. Such amazing performance results from our use of Genuine Forsyth Rifling™ in our barrels and is unique to our Faeton rifles.

Another advantage of the higher velocity obtainable with the Forsyth system is a very flat trajectory. Looking closer at the chart indicates the ball actually rises above the line of sight very little on its trip to the 100 yard mark and then dips a mere 2.7 inches at 120 yards providing virtually a point blank range of 125 yards. No range estimation or hold-over is needed - just aim and shoot.

To our way of thinking that’s pretty amazing performance from a big-bore round ball rifle!

More information regarding the Taylor Knockdown Formula may be found on the site of The Underhammer Society at: http://www.underhammers.blogspot.com/.

It's not just another muzzleloader,
it's High Performance Art!

R J Renner
Hi. I've been a student, admirer, designer, and builder of underhammer firearms for over 30 years. In that span I've crafted over 200 high-quality Forsyth-rifled underhammer guns, having explored the possibilities from the ordinary to the exotic. In 1996 I founded Pacific Rifle Company to explore the market's interest in a quality underhammer rifle. The justly-famous Zephyr was the result of that effort. Thankfully, there was and still is great interest in quality underhammer arms. Although I sold PRC in 2006, I continue to design and craft high-end underhammers as I am truly afflicted with underhammeritis - a condition which can be contagious!